…‘Cause I ain’t been nuttin’ but bad.

Truthfully, I’m not getting anything for Christmas.* But it’s not about being good or bad. Our Christmas tree will not be showcasing gifts this year. I even told Ryan that I don’t want to exchange gifts because I’d rather him save his money for a car than spend it on me. (What do I even need/want anyway?)
*With one exception: money from my maternal Grandma. Because sometimes she just hands me money for no reason.
Weird? Maybe to others, but not to me.
We’ve never really been “big” on gift exchanges in my immediate family (Christmas and birthdays). First off, my Mom hates shopping and my Dad was never really a shopper himself. Although, it was funny/cute because he would sometimes “secretly” go Christmas shopping (the week of Christmas) and buy a few things for us. On top of that, my parents (well mostly my Mom) give practical gifts. One time I opened up a nice-sized box to find… a ceiling fan. Ha, I’m used to it by now. And actually, I love that ceiling fan!!!
As for me? I’ve followed suit and I don’t buy my family gifts either. I have bought a couple in the past, but they never expected anything. Why would they? “Christmas shopping” is not on my to-do list (if I had one, that is).
If someone asked me “What’s the best Christmas gift you’ve ever received?” or even the worst, I cannot remember! It’s partly my memory, but also partly because I don’t have Christmas gifts that stick out in my mind. I’ve been trying to rack my brain and remember something, but all I can come up with is the trains my brother used to get for Christmas.
Up until maybe last Christmas, I did have some presents to open. It was just never the same compared to what I heard from my friends’ Christmases. But after my parents bought me a car when I was 15 and a half, presents became scarce. I didn’t mind because hello, they bought my car! I appreciate my car and the insurance payments being on them. They’ve also paid my cell phone bill since the beginning.
However, it seems like they sometimes bought me gifts on random occasions. Like in 2003 ish when my Dad went out and bought my brother and me our first computers (because we would fight over the only computer in our house at the time). Or last spring when he bought me a nice TV (although he said it was for the lifelong good grades I earned). So we have received nice gifts in our lifetime.
I’m not really deprived as it first may sound. It’s actually taught me appreciation for what I do have and I never really liked my parents spending a lot of money on me anyway. It made me feel guilty. I’ve always bought gas for my car and my own clothes. I also paid for my MacBook and I pay for college (well, I did before it was free). If my Mom ever asks if I need gas or food money, I usually say no.
With all that being said, I think it’ll be different when I have my own family. It would be fun to have a nice number of presents underneath the tree. They don’t have to be expensive gifts, but thoughtful! Sometimes it’s fun to think of gift ideas, although it can also be challenging (especially when you have a boyfriend named Ryan Ray.) I just want to make it special and fun for my future kids, while at the same time teaching them to appreciate what they have. 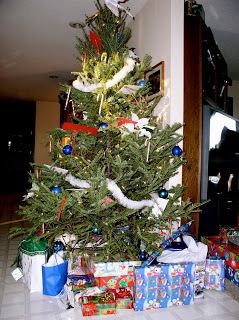 Picture is of Christmas 2007, when we had Christmas at our house with my Dad’s side of the family (hence all the presents- not ours.)