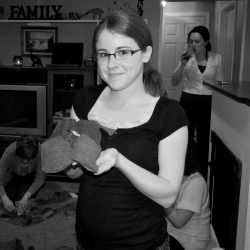 I first heard of the organization Sole Hope through Ashley, who hosted two shoe cutting parties that I attended last year.  We all gathered with a bunch of our used jeans, and traced, cut, and pinned all night!  Then, those shoes would be sent to North Carolina, Uganda, and Zambia for sewing the soles on and making a complete shoe.  In the process, Sole Hope is providing jobs to the impoverished and unemployed by teaching them the trade of shoemaking.  Finally – those shoes would reach the feet of children in Africa – who need shoes to protect their feet so that they may live healthier lives.

Isn’t that an awesome process?!

It’s been about a year since I attended Ashley’s shoe cutting parties.  I have since moved to Indy and I couldn’t come back to Missouri for the last one.  However, I haven’t forgotten about Sole Hope.  Ashley is now their first ambassador, which basically means she is a dedicated volunteer who is helping them from Missouri.  She is also in charge of the parties now – which is really neat!

I noticed on Facebook that they were looking for an ambassador in the Indy area.  I thought hmm… specifically Indianapolis?  It felt like the post had my name written all over it.  I had recently been thinking about wanting to volunteer my time or skills after hearing the Steps of Justice speak at Church one night.

So – I emailed Sole Hope and explained that I live in Indy, but I know Ashley very well!  :)  I ended up meeting Dru, the executive director and the founder’s wife, while he was in Indy for a conference the other day. It’s funny because he said they used to live here – and now they live in Asheville, North Carolina- where Ryan and I are going on our honeymoon (and may live someday!)  Small world!

Now one of the first things I am going to do is work with Ashley to make a couple videos for Sole Hope.  One will be a “how-to” on hosting a shoe cutting party and another will be an interview with her son.  Then from there, I’ll be having a shoe party myself and who knows how else it will evolve.  Their ambassador program is new, and they are looking for other ambassadors to represent them across the states.  I’m excited to start volunteering!

One response to “Sole Hope Ambassador”