Skip to content
Last night I finally gave Ryan his 2.14 presents! I know, I know; a little belated, but I’ve had them since January/February and he wasn’t here. One was a mug I painted him at The Blue Beagle…Jennifer & I went there in January (see the pictures). I’m definitely nothing close to artistic, but hey I tried. ;) I also got him some tea, a honeycomb to eat, and I am Not a Paper Cup. 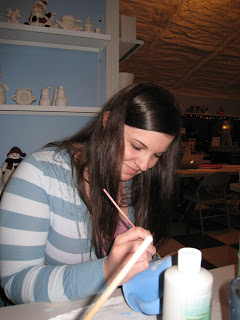 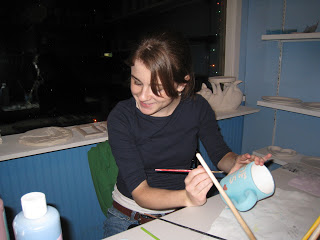 Colds are no fun. Enough said.
Ryan & I went fishing this evening– wasn’t very good fishing weather, but I did win this time: 4 to nothing. It’s about time, hehe
Tomorrow I’m getting something done to my hair… you’ll just have to see what that might be. Actually, I don’t even know for sure.
The new episode of Jon & Kate Plus 8 was so sad. I think they should be trying to work out their marriage problems personally instead of broadcasting them on Season 5. Jon seems so lost and Kate seems obsessed with making money. In my opinion, she spends way too much time away from her kids. I think someday at least one, if not more, of their kids will be angry/have negative feelings against the show. I just knew something was weird/going on in their family ever since the move to their new house.
Today my mom made homemade vanilla ice cream & yesterday homemade sugar cookies. Mmmm…
Tomorrow is my Grandma’s 88th Birthday! And she’s still doing great!
Summer loves: Lightning bugs & honeysuckle.