I can’t believe it’s already November 1st. I think I said that about October and September too, but it’s all so fast.

My Dad has been free of suffering for 3 months. Oh what it must be like in Heaven… nothing that my mind can dream up or imagine.

Did you ever read this story?
Something similar happened tonight with my Mom. She drove to that same Lake, playing the same song Drive, but this time thinking about my Dad. She felt as if he was right there with her, and she sat in her car watching the sunset by the Lake. As she was sitting there with the car off, the interior car lights blinked on and off on and off.
I was feeling depressed until my Mom came home crying a bittersweet cry and told me that story. When she drove home, a song that says “I didn’t mean to make you cry” played.
A few weeks ago, my Mom made friends with a lady who was wallpapering our house. I was asleep when this happened, but she talked to her about my Dad and read her a few of the speeches from the Memorial while the lady was wallpapering. The lights were already on in the kitchen and they hadn’t touched them since they were turned on a few hours before. As she talked about him, the lights dimmed and became brighter and continued this until she had to go stop them herself. My Dad’s cat, Lucky, started being feisty and playful, playing with the rugs as if she sensed him there.
We can’t see him, but he’s still here.
I really really miss my Dad. I don’t like this new normal and I’ve really been struggling with it lately. My family isn’t the same anymore.
Below is something that one of my Dad’s sisters wrote the day after he passed away. April 15th was the day he was told he had 6 months or less to live. He lived less than 4.

I remember the date perfectly well – April 15th. We were sitting in the doctor’s office: Rick, Janice, Francine, me. That was when God spoke to Rick and said: ‘Rick, I’ve got the ideal job for you. I want you to be President and CEO of The Heaven Corporation. You would be the Rick of all Trades for me. I’ve got thousands of applicants, but none of them could fill this position as well as you could. Think about it, and take whatever time you need before you make your decision.’

This made Rick mad. He was REAL mad. How dare God entice him with this offer when he knew perfectly well that he wasn’t ready for it. Besides, God’s offer had a 100% travel requirement attached to it, which means he’d have to be away from all his loved ones. God’s offer was always in the back of Rick’s mind. He continued to think about it, and God continued to provide more details about the job. He’d get Rick the best tool belt with all the best tools. There would be a lot of work to be done: little things like leaky faucets, toilets that wouldn’t flush, broken garage doors. Then the bigger things: electrical wiring, houses to build, cars to restore.
As time passed, God’s offer keeps moving closer in Rick’s mind. He somehow wonders if it’s an offer he can’t refuse, but he’s just not ready. He’s still struggling with the 100% travel requirement. He knows his family will be ok without his presence, but he will sorely miss them and they will sorely miss him. And although he wouldn’t physically be here for them, his loved ones could call on him and talk to him any time they wanted.
On Thursday, God spoke even stronger. He had forgotten to mention that Rick could build his own dream home. But God knew that Rick’s dream home would be the same one Rick built 15 years ago and now lives in with his loving family. And he could take all the time he needed to finish the basement. God also has a Camaro waiting for him to restore.
On Friday, Rick finally got back to God. He said: ‘God, I’m ready to ACCEPT your offer, but I need a little more time to tie up some loose ends. I want to see all my loved ones one more time so that they understand this decision. Be sure to have that special tool belt waiting for me because I’m so ready to get started.’
On Saturday, Rick started his new journey. Although he doesn’t have a cell phone, we can still call his name and talk to him anytime we want. He’s peaceful and he’s happy now. He’s really happier than he’s been for the last 2 years. And, you know what, he’s already working on the foundation of his new dream home.
-Marla 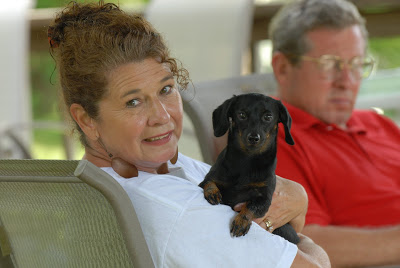