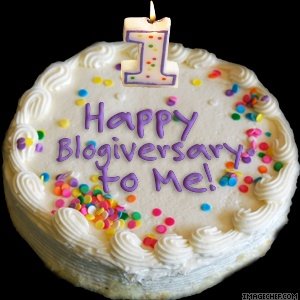 via Google images
I’ve been blogging longer than a year if you count Xanga… but last January 5th I moved to BlogSpot. I was inspired by Ashley’s blog (and also found Mrs. Haid’s and another Ashley’s around the same time) and decided to start my own blog. I thought it looked fun (that it is) and I had no idea that this bloggy world existed!
Over the past year, I’ve developed and changed my blogging style… and although my perfectionist nature makes me want to go back and revise some of my posts, I won’t. That’s certainly not the point to this whole blogging idea. It’s about what I feel and write at the time … and looking back to reflect on it.
I started out writing this blog just for me… and told a few of my friends about it. Then when I discovered more blogs, I realized other people could (and slowly were) starting to find it. 46 followers/60-ish subscribers over the course of a year isn’t much, but it wasn’t my goal to gain readers. It’s fun to have other people read along, but in the end it’s still a place to record my thoughts.
It’s been a lot of thoughts about struggles in my life… so it’s kind of writing therapy for me. I’ve wrote a lot about my Dad, transferring and other school decisions, my long-distance relationship, loneliness, grief, and so much more.
Here’s a favorite post from each month:
January
Looks Can Be Deceiving
February
Preview of Love Story
March
Daddy’s Girl
April (didn’t have much to say this month)
DQ Contest
May
Holy carp!
June
14: A Poem
July
We’ll get there fast and then we’ll take it slow
August (a few favorites, but I’ll choose just one)
The glimpse called summer
September
My Only Sunshine
October
The mushy truth
November (when I successfully completed NaBloPoMo!)
[M]^2 + [R]^2
December
The one in white
Leave a comment and tell me one of your favorite posts of mine and get a secret, extra entry into my first giveaway which is coming right up!
According to Google Analytics, my Dad’s obituary is the most viewed post, with the posts Pulled, Day After Christmas Feelings, and My Dad is Finally Home coming after it.
It’s probably because there were about 50 searches of my Dad’s name on google which led to my blog…
There were also many searches from my I’m Gettin’ Nuttin’ For Christmas post from people looking for sympathy because they weren’t getting anything for Christmas either.
Although there were 5800 visits, there were only 1433 unique visitors with a 62% bounce rate.
The average time on the site was 2 minutes and 47 seconds and the average page views was 2.02.
I can’t forget to mention…Over the past few months, I’ve discovered blog giveaways! I’ve also won quite a few, which makes them even more addicting.
Thanks to all my readers who listen so I don’t have to talk to myself .. and also for leaving sweet comments! :) My favorite emails are “Intense Debate Notifications!”
Stick around for the second year of this blog if you’d like. I hope my life brings better things to write about.