Skip to content
Today was another amazing 70+ degree Spring day. In fact, I wore flip flops for the first time this season! I also have painted toenails for the first time since… a year and a half ago. I used to not be able to stand my toes unpainted, but then I got used to it. You see, I have this very embarrassing problem on my big toenails called fungus and I’ve been trying to get rid of it ever since then. Google says it’s a very difficult task without taking anti-fungal meds that can cause liver damage… sigh. So for now I just covered it up with polish and will forget about it until I go to the Health Foods Store for a better solution. It doesn’t look as bad as it sounds by the way…just a thickened nail that is barely a different shade of color. (I can’t believe I just told you that. Can anything sound more disgusting? I’m not gross, I promise! I have no idea how I got it, ew!) 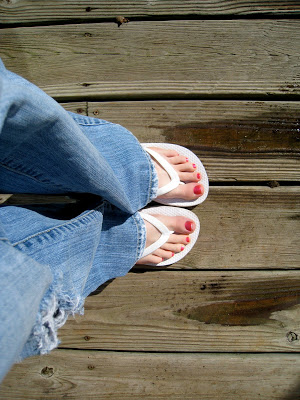 Now there’s a late night Spring thunderstorm. Does it get any better than this? Oh, maybe if I was cuddling, yes! :)
Today was my last day of classes this week because of St. Pat’s Break! Woo!– now everyone (besides me and maybe a few others) can get drunk. I’m going to go visit my Grandma instead.
Some of my professors are way too supportive of the whole St. Pat’s campus-wide drinking binge. One asked if he needed to re-schedule a student presentation around the students’ drinking schedules? We were just going to watch a movie on Tuesday, but we’re behind in the class so we didn’t.
Hello! The reason why we have Thursday and Friday off plus the weekend is so they can party then! Why excuse the whole week? When would they ever do such a thing any other time?
Another professor asked the class to show, by a raise of hands, who would be coming to class drunk. Several raised their hands and he said it was okay, and he would do a “cool activity” that day instead of regular class.
He ended up doing a liquid nitrogen demonstration, like he has been doing in local schools for the past 20 years. It’s funny because I figured out that he came to my elementary school back in like 3rd grade or something! I vaguely remember the demonstration and being afraid to touch the liquid nitrogen. But today I did (quickly) stick my hand in it–and ate a frozen marshmallow (they’re good roasted and frozen.. who knew!) — and ate yummy ice cream made from it! Also, who knew that ice cream was so good with just a few ingredients (cream, sugar, vanilla)? I also watched, through a pair of goggles, a plastic ball and tube get shattered against the wall and table. Liquid nitrogen is really cool and so is feeling like you’re back in elementary school for a college class. He said when we are teachers (if we stay around this area) he can come to our classrooms to do his demonstration!
Here’s part of the ice cream making process from today:
So I didn’t mind having the “cool activity” in Environmental Physics today, but the whole St. Pat’s tradition gets on my nerves. From the start of January(?) until this week, there is a countdown of how many “daze” until St. Pat’s week. As it gets closer, campus becomes a sea of green and you pass by yards of frats with guys on couches with signs that say “Honk for St. Pat’s” and “You honk and we’ll drink,” with accompanying beer cans all over the yard. Students and staff receive emails with various crimes committed during the week (Last year there were several incidents of rape and they act like it’s expected and no big deal. If it was any other week, I’m pretty sure it’d be concerning!). There are other crazy things like guys “killing snakes” on your way to class, a drunken parade, and anything else that always make it the “Best Ever.”
Not so much.
Maybe these people should try going to their future jobs drunk and see what happens? Perhaps I’m a little biased because 1) I don’t drink and think it’s quite ridiculous to get drunk and 2) I transferred from a Christian school where drinking alcohol, even when legal age, is totally unacceptable. Nah, I think I’m right in saying that St. Pat’s is a little bit crazy here at MUST. I’d probably get in trouble for saying that on campus. ;-)
Oh, I forgot to say how my Ecology presentation on the Everglades went last week. HAH. I’m judging it on the fact that after class, some guy that I don’t know came up to me and asked “If I’d like to go out with him sometime?” … I think it might’ve went well. As for how the rest of that guy’s afternoon went, he may say differently since I broke the news that “Actually, I have a boyfriend.” I think this is funny that it happened to me, so I had to share. Ryan laughed too when I told him… but he probably thinks I should wear a fake ring on my left hand to keep the boys away. ;-) Just kidding, just kidding… I doubt it will happen again. I look like I’m 12 y/o, remember?
I hope no one from MUST reads this post…. including my professors, the communication guy for making fun of their name, hardcore Pat’s fans, or the boy who got rejected. But hopefully you enjoyed hearing me rant.