I never thought I’d say this, but I became a vegetarian! This has evolved since the springtime, ever since Ryan and I watched the documentary “Forks Over Knives.” I say evolved because at first we were more like “flexitarians” (Ryan was much better than me). Eventually, I cut out all meat from my diet. 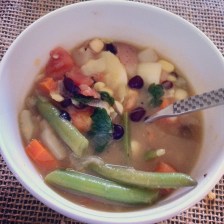 Yes, the documentary is that powerful – or at least to us it was. (Funny side note – our good friends Todd & Carrie watched the documentary the same week and also made a diet change.)  You need to watch it if you haven’t!  It’s not as scary as Food, Inc. if you’ve seen that one. It shows a lot of evidence and data that meat (and dairy) is not good for us.

To sum up my main reasons for not eating meat: it’s what I think is best for my body, it’s disgusting how most animals are raised before they are slaughtered, and eating lower on the food chain is environmentally friendly.

I guess I shouldn’t be surprised that I made this diet change. I was never a great meat eater – I would easily get grossed out by it. However, I did become obsessed with Chick-fil-A when I moved to Indy and thought I wouldn’t be able to give it up. BUT – the cravings soon subsided.  Now I crave Pad Thai from Noodles & Company… mmmm!

The fun thing about being vegetarian is trying out new things and being more creative when it comes to food. It’s a fun challenge since most of America thinks every meal should be based around meat. That’s how I grew up too!  Some vegetarian dishes we’ve made: spaghetti squash, chickpea + avocado salad sandwiches, vegetable soup, vegetarian chili, stir fry (veggies, rice noodles, rice), spaghetti, veggie burgers, veggie pizza, breakfast burritos or bean burritos. Notice a trend? In the process of not eating meat, you eat more VEGGIES, which we all need more of! We also have a juicer so we can juice fruits & veggies.

The challenging part?  Finding vegetarian options at restaurants, especially on the road when you want something quick. Our go-to places have become Noodles & Co and Qdoba. We also have a few favorite local restaurants that have delicious veggie options (Three Sisters Cafe and Bagel & Deli). There’s always pizza too; my favorite is pineapple!

Unfortunately I haven’t lost any weight with this new eating habit. I’ve gained at least 5 lbs in the past year (ugh, can’t gain anymore, I’m only 5 foot tall!) I guess that’s because I’m still addicted to almonds. ;)

Disclaimer: I can’t say that I am a 100% perfect vegetarian. Sometimes we have to eat meat if means food or no food (like at wedding receptions when we’re shooting photos or video). Or if I get the craving once in a blue moon, I’ll allow myself. (Usually it’s not as good as I think it sounds though). I also don’t want to get snobby about it and in turn, feel or act superior to others. :)