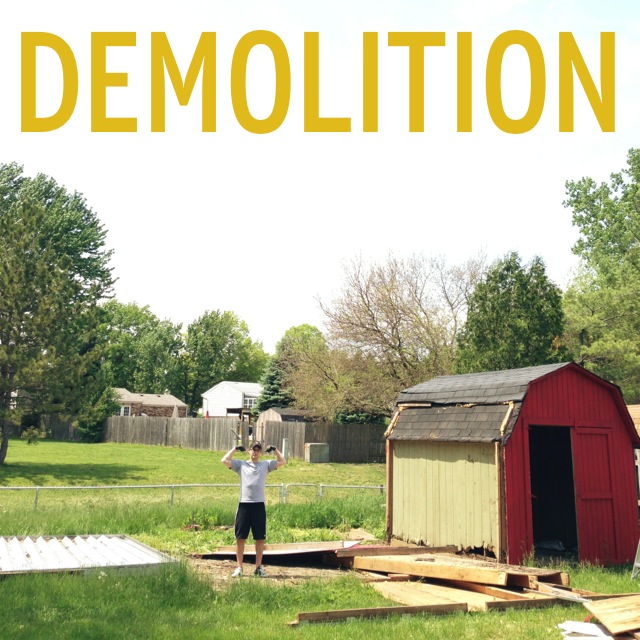 When we bought our house, it had a huge, ugly shed in the backyard that was falling apart. We asked the sellers if they would remove it after our inspector said it wasn’t worth keeping, especially with all the termite damage. However, they denied our request, as they must’ve thought it was in good shape because they had just repainted it (a horrible paint job, may I add). The shed had an addition that didn’t even have a floor and was never built correctly. What would we have used it for anyway?! We have a huge addition on the back of our garage that is great for storage and it opens to the backyard. The shed was just an eyesore in our backyard – and pointless. So.. we thought we would  knock it down, haul it out, and be done with it. Easier said than done. :)

You know how things never go as planned with home projects…. Well, demolition was fun at first and then became a pain. Poor Ryan was really sore from swinging the sledgehammer and axe. We thought we could rent a moving truck and take everything to the dump and it would be cheaper than renting a dumpster. Well, after renting the moving truck and throwing a bunch of the shed in there..we found out 1) it wouldn’t all fit in there and 2) it would cost $200+ to take it to the dump. The plan failed big time. I guess that’s what we get for planning poorly and trying to a take a shortcut.

So we unloaded everything out of the truck, took the truck back, and rented a dumpster. Take our advice – just rent the dumpster. ;) Oh and we even burned a little bit of it because the dumpster wasn’t quite big enough. Go figure. We also gave away the huge roof that was on the addition of the shed. It felt good to finally get everything in the dumpster and have a huge area of our yard back.

With the newfound space, we decided to build six 4×4 raised garden beds. The size of the garden boxes was determined by what size boards fit into our car. ;) At the time, my cousin and her friends were visiting so they actually kind of took over the building of the garden boxes. That was so awesome and helpful!!!

We secured them into the ground and our yard took on a much better look!! We wanted to get dirt and start a somewhat late garden (in June), but then that was a huge expense to buy it and have it delivered. So instead, we thought we’d find some free dirt on Craigslist (yes, that is listed a lot from people building pools, etc), rent Menards pick-up and go get some free dirt. Well.. unfortunately we never got around to it. Plus we were gone a lot over the summer and didn’t want our garden to dry up. So – next year – we will have six awesome raised garden beds with a bountiful harvest! Wishful thinking?! :)