Last night I missed American Idol because I thought it was from 8-10, but it was really 7-9. =( However, I was REALLY glad to hear that Kris Allen won and I had fun fishing instead…

Ryan and I got the paddle boat ready for the summer and we were off to our fishing spot at Little Prairie Lake! I was hoping to actually catch a fish because the other day we had no luck!
Ryan caught the first fish of the “season!” I admit that he won; the score was 7 to 3. And he gets an extra award for catching a fish with his hands. A BIG FISH!! 100% truth!
We were fishing from the paddle boat, not catching much yet… and then a huge carp caught our attention. At first we thought it was a catfish, but as we got closer Ryan realized it was a carp. It was swimming around the top of the water so we looked at him and then went on to try to catch more fish. Later, we saw him (we think it was the same one) over in the weeds so we decided to try to go get him. Ryan said he was going to catch him with his hands, I thought maybe just touching him would be good enough.. Well, we got him to move out from the weeds and he just swam around and starting floating on his back!! He may have been playing dead, haha, but really I think he just was relaxing on his back. No he was not dead; he was healthy! This is not your normal fish. I know, we thought the same thing: this is really weird. So we finally got up next to him to where he was on Ryan’s side. I said, “Ryan he wants you to rub his belly!” Sooo…yep, Ryan pet him, LOL. And the fish just sat there and enjoyed it. Ryan started grabbing him by his fins to try to get ahold of it and pick it up. The fish didn’t mind. Finally Ryan got ahold of it and scooped it up with his arms and put it in the boat!!!! I started freaking out because it was HUGE (like 20 lbs Ryan said) and it was taking up his side of the boat!!! It was very calm though and I took some pictures and he let it back in the water. YES, HE CAUGHT A FISH WITH HIS BARE HANDS!! haha! After he let the fish back in, it didn’t swim off. It stayed around and let us touch it again. I touched it this time (I never touch fish)!!! It was verrry slimy. We finally moved on and started catching fish (with a pole) and let that fish hang out. I hope he is there next time because he was so cool! I’d say this is one of the best fishing stories yet… 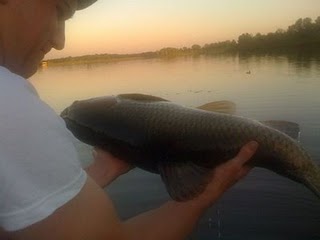 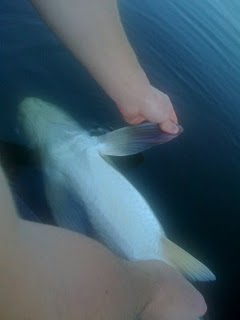 Floating on his back! 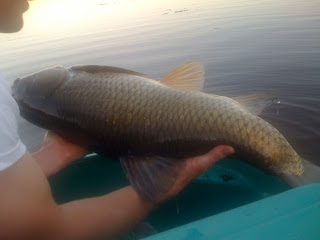 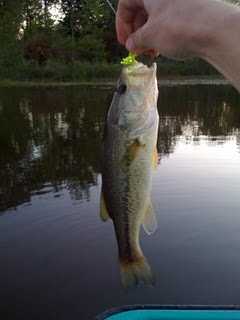 I think subbing at the high school is one of the easiest jobs, but also one of the most boring. Subbing is a great job because you don’t have to say yes to working; you don’t even have to answer the phone when they call at 6 AM! I’d say it’s worth the $70 a day. However, the minutes drag on and on…. and there’s not much to do besides sit there and tell them to be quiet and sit down 50x. Oh and repeat over and over, “No, I am not letting you leave” and “Yes, I am Steven Merenghi’s sister.” Many websites are blocked, texting is not allowed… many time wasting activities are NOT allowed! So I sit there and think.. Wow, I was once in their place?! How did I stand sitting in a class for so long, wasting so much time? Was I really that immature? Am I immature now and will I look back on college students someday and think the same thing? It’s much more fun at the elementary where the day is busy and you actually get to teach and interact with little kids.

It’s also even longer of a day whenever you are awaiting that evening because of a certain someone getting in town….. Patience. Are you here yet!?! :)
Good news: I got a 98% on my philosophy final!!!! I was very nervous about that grade/class and I am SO glad it’s over. Yuck, I do not like philosophy.
Another semester with all A’s. Sometimes I wish I would get a B and get it over with because the pressure keeps building! Oh well, I’ll save that for Organic Chemistry… Speaking of this topic, Nour: “overachiever” was a puzzle on Wheel of Fortune the other night and I didn’t figure it out! HAHA.
OH and KRIS ALLEN IS IN THE AMERICAN IDOL FINALS!!!!! I HOPE HE WINS! I think American Idol will rig the votes if Kris gets more votes than Adam.

So this is my lovely first-week-of-summer-break-supposed-to-be-finals-week week and it’s pretty nice so far. …Although it will be MUCH better on Thursday night when Ryan arrives: SO EXCITED!! <3

Right after my last class on Friday I went to my 88-year-old Grandma’s for the weekend with my mom. I just realized this sad fact about my Grandma–she has been affected by cancer more than anyone I know…her mother: colon cancer, her brother-in-law: brain cancer, her daughter: breast cancer, her husband: lung cancer, her son-in-law: oral cancer, and basically herself (the doctors removed some benign lumps so she had a double mastectomy to be safe). That list does not include her friends. I just can’t imagine how she must feel seeing all these people losing their lives to cancer. My other Grandma is a breast cancer survivor. All of this family history scares me…
Today I went to the doctor with my family in STL. My dad started on two types of chemo he hasn’t tried yet and will be on those for 8 weeks to hopefully keep the cancer under control. We are praying for no side effects and good results.
I really don’t have anything exciting to say… just thought I’d share about the start to my summer.
American Idol is on in an hour! I’ve been watching it since they chose the top 10 and now they’re down to the top 3! I’m really into it now! ha 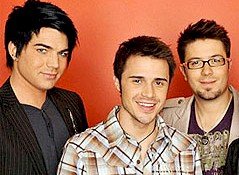 Personally, I want Kris Allen to win (the guy in the middle)… we’ll see!
Well… enough of this random and pointless post.