Wow!! … 7 people have googled my Dad in the past few days and clicked on my blog because it’s the first result and only one that is relevant. A few were looking for the obituary so I will post it here incase someone else stumbles upon it.

You are so loved and missed Dad. 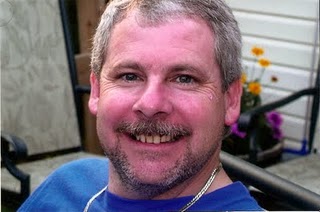 Rick S. Merenghi, of St. James, MO, passed away Saturday, August 1, 2009, after a courageous two-year battle with cancer. He was 50 years old.

Rick was born in Maryville, MO to surviving proud parents Frank and Willa Merenghi. He attended Maryville High School, and during this time met his high school sweetheart and love of his life, Janice Wells. After graduation he earned certifications in electricity and electronics at the Maryville Vocational Technical Institute. He married Janice, in May 1981. They were blessed with a daughter, Mindy, 21 y/o, and a son, Steven, 17 y/o.

Rick and Janice settled in the Rolla/St. James area in 1985. He was the Director of Facilities Maintenance at Mercy Medical Group (now St. John’s Clinic) for ten years before joining Brewer Science, Inc. At the time of his death, Rick was the Plant Engineering Manager for Brewer Science, where he was highly esteemed and admired. He received an engineering excellence award and special public recognition from a St. Louis engineering firm for his outstanding work on and contributions to Brewer Science’s new facility.

Rick was a self made man. His career path took him from an appliance and TV service technician, to a carpenter on custom home construction and remodeling, to health care equipment and facility maintenance to engineering management in plant operations. In addition, he did general contracting on the side. He was an accomplished, meticulous craftsman. He constantly challenged himself to conquer new and different projects. Because of his brilliance, his construction and maintenance services were always in demand. He enjoyed woodworking and tinkering in his workshop. He built a beautiful home for his family in rural St. James. He and his wife enjoyed the simple pleasures of life and marriage. Classic car restoration has been a life long hobby for him. His trademark to the world was his brilliant wit and sense of humor. He was a dedicated father and husband and shared a heart-connection with both of his children.

Rick is survived by his wife Janice, and two children, Mindy and Steven, his parents, Frank and Willa Merenghi and his mother-in-law, Margaret Wells. Those who mourn him include his sisters, Marcie Giarrizzo, Francine Merenghi (and Jim Sowers), Marla Merenghi (and Al DelRosario), one brother, Vinnie Merenghi (and Ann Merenghi), and one brother-in-law John Wells (and Eve Wells). He also leaves behind his Aunt Mary Jane Merenghi and many nieces and nephews; Todd, Karen, Emily, & Grace Nelson, Joel Merenghi, Michael & Rachel Merenghi, Meredith & Ben Yonker, Darah McJimsey, Christy, Christian & Amelia Chesnut, Mitchell Nelsen, and Austin and Cameron Wells, and many wonderful friends who enriched his life.

A Celebration of Life will be held at Meramec Springs Park (Pavilion C) on Saturday, August 8, at 1 p.m. Friends and family are requested to bring their own lawn chair, and are encouraged to dress casually. In lieu of flowers, donations to a memorial fund for Rick’s children have been requested. Donations may be sent to Town & Country Bank of St. James, MO; pay to the order of Memorial Fund of Steven & Mindy Merenghi.