Ryan and I had a key and connections to a house in Ft. Myers, but we couldn’t decide if we wanted to leave Titusville and visit the Gulf side.  It was our original plans, but as time went on, I just didn’t want to leave Titusville!  Well, waking up past noon on Monday made the decision for us.  We would stay in Titusville.  Christy and the kids had already left to work and daycare, so Ryan and I had the day to ourselves.  We (okay, I) decided to go to Daytona Beach, which was about 30-45 minutes north of Titusville.

We packed up some lunch and boogie boards, and set out to the beach.  It was already late afternoon by the time we arrived so we didn’t stay long. We only took a few pictures that day because we were too busy boogie boarding.  Sooo fun! 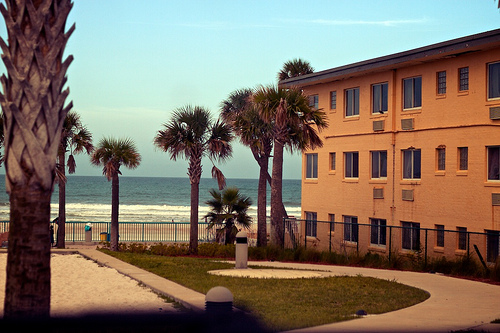 On the way back home, we got Chick-Fil-A (second time on the trip!) for dinner.

By the time we got home, it was already bedtime for the kiddos.  We decided we would stay home with them the next day while Christy worked.

Tuesday, our last day, was spent with the kids.  I slept in since it was Ryan’s turn to get up early with them.  :)  Once I got up, I made pancakes again, changed a diaper and got them dressed, etc.  (notice how I said once I got up this stuff happened…hehe, jk, I am grateful that Ryan got up first!)

Once everyone was ready, we decided to go bowling.  Christian had mentioned it all week, so I thought why not!  Ryan and I hadn’t been in a while and it sounded like fun.  We went to the local bowling alley (it was really nice!) and set out to play two games.

After Christian bowled a few times, I started noticing something wasn’t right.  He didn’t want to bowl anymore.  He said he was hungry so I got him some cheese pizza (one of his favorite foods!).  He barely would touch it.  Then he said he was cold and was covering up with his shirt.  We were still in the middle of the game so I let Amelia finish out his turns while he sat there.  She absolutely LOVED it.  The rest of the day she said “bowling, bowling!”

I promise I’m being honest when I tell you that her and Christian beat Ryan and I.  Should I be telling you that?  LOL.  We were horrible!  Oh and another confession: I always use the kids bowling balls even though I always exceed the age and weight stipulations.  They are a perfect weight for me.

There are some bowling videos I will post soon too.  In one of them, after Amelia bowled, she was so excited that she hugged me!  Her cuteness kills me. 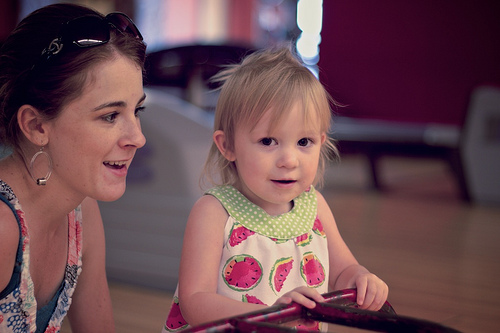 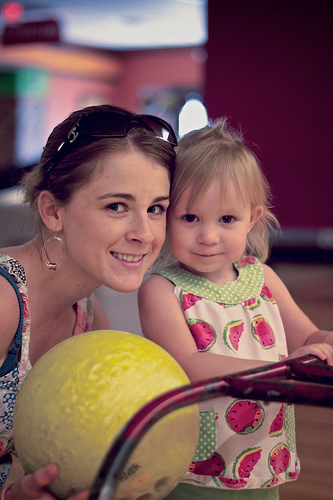 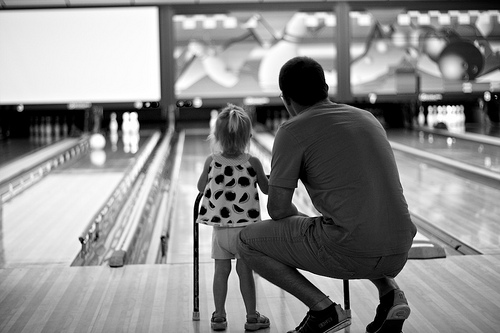 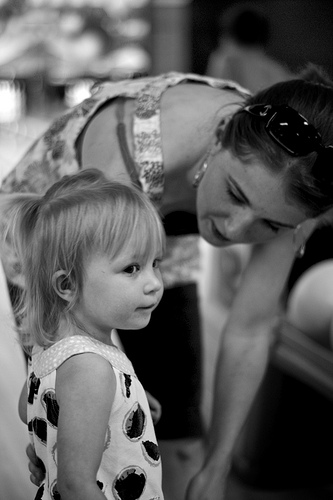 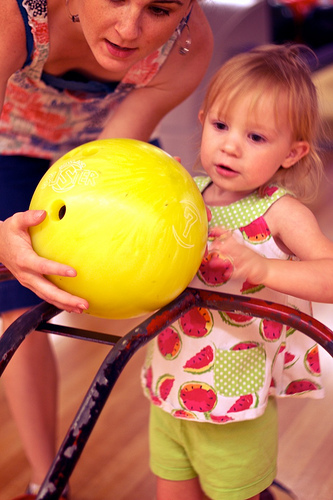 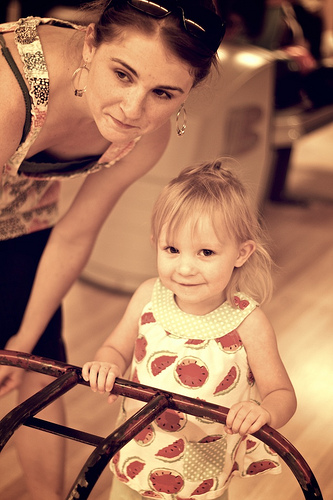 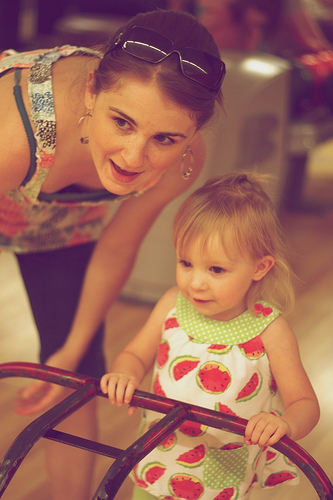 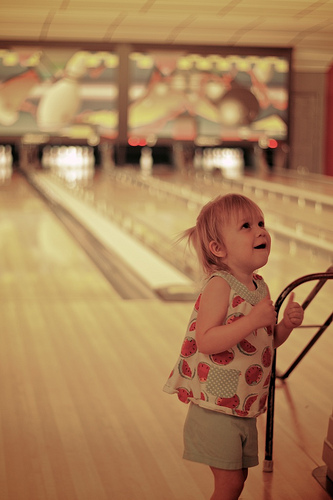 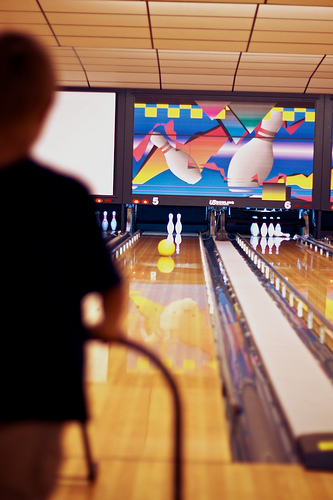 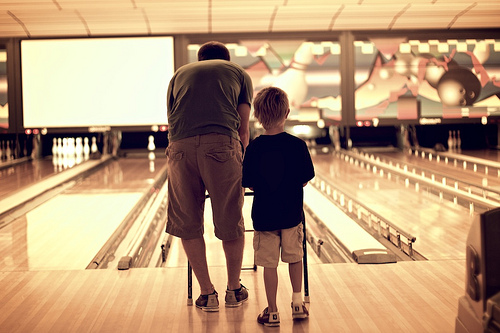 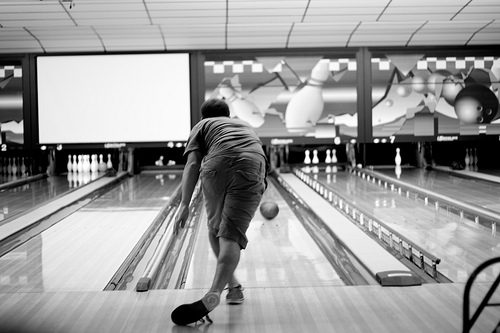 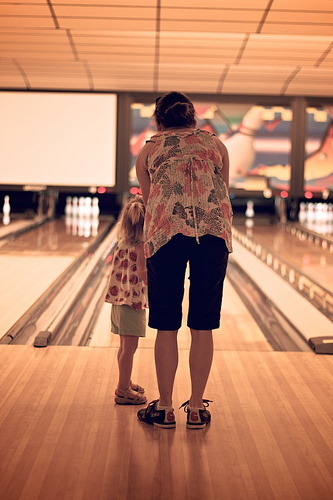 Since something didn’t seem right with Christian, we ended up only playing one game.  When we got home, Christian immediately went to bed and slept the rest of the afternoon.  I was really suspicious and took his temperature… that explained it.  It was 102 degrees F!!!  Poor little guy, I felt so bad.  Especially because that put a damper on the rest of the evening.  He so badly wanted to go on a bike ride after he rested, but of course he needed to continue to rest with such a high fever.  Amelia wasn’t sick and she was definitely bummed when she heard we couldn’t go on the “bicycle.”  We were all bummed along with them, but we wanted Christian to get better.  The rest of the evening was just spent lounging around.

Oh and a having a little PhotoBooth fun… good entertainment for 2 year olds!

After the casserole dinner that Christy made, Ryan and I made dessert.  This was way more successful than our homemade pizza!  It was a really simple, but yummy recipe for a chocolate chip blondies (also inspired by Food Mob.)

I was so sad that it was our last night in Florida.  I didn’t want to leave my sweet cousins or the beautiful ocean and state.  But, as the horrible proverb goes… “all good things must come to an end.”  I don’t like that one!  I was seriously considering staying and becoming a live-in Nanny.

We reluctantly said our goodbyes the next morning (Wednesday) and didn’t start on our way back until 2 pm or so.  We took a different route home, through the panhandle of Florida, Alabama, Mississippi, Tennessee, Arkansas, and South Missouri.  It was a change of scenery and my first time in Alabama!  That’s where we stayed the night so we didn’t have to pull an all-nighter again.

Oh yes, did I mention I woke up sick that morning we left?  I think I caught the cold that Christian had.  So it wasn’t the most fun on the way home since I was so tired and not feeling so well.  We made it though, and arrived back home on Thursday night.  It was a bittersweet to be back home and the fact that Ryan had to leave on Saturday to Part II of summer camps.  I was sick for a good week, with a low grade fever and a raw throat.  But honestly, it was all worth it because I caught it in FLORIDA!

Thank you, Christy, Amelia, and Christian, for being such great hosts and inviting us into your home for a week!  We so enjoyed ourselves and made great memories together.  Miss you and love you three!

One response to “Final Days in Florida”