Yesterday I took my first set of maternity photos for a friend from HS (we go way back).  :o)  She is due with her second baby in just a couple of weeks and has a little girl who is about to turn 3 (who is ADORABLE).

END_OF_DOCUMENT_TOKEN_TO_BE_REPLACED

How does time slip away so quickly? I haven’t blogged since Monday and I didn’t mean for that to happen. I can’t blame it on tests again… but I can blame it on the fact that I feel like the energy is sucked out of me every day.

I hope I don’t bore you, but I don’t know where else to start except with a catch-up…
Weather:
The beginning of this week brought some snow… not 9 inches like they first predicted, but enough that my Mom had to drive me to class for a few days. My brother (who is a senior in HS) had half a week of snow days! Not fair!
Appointments:
I had three appointments this week… doctor, dentist, and therapist!
I went to the doctor because my therapist recommended anxiety medicine. It’s actually an anti-depressant, but also helps anxiety — and is very much needed in my life right now. It takes about two weeks to start working so I’m patiently waiting…
Oh, but also my Mom started on the same medicine yesterday. Her blood pressure is dangerously high and it’s probably due to stress/anxiety. (Anxiety is hereditary, did you notice?) We are currently trying to get new health insurance right now and I think we are about to get rejected.
My dentist appointment was fine since they didn’t take x-rays (and hence the words ‘wisdom teeth’ were not mentioned).
My therapy appointment was more talk about anxiety. (I’m tired of saying that word.)
Babies:
I babysat Wednesday night and Friday night. I am also babysitting tomorrow (Valentine’s Day! That’s what happens when your bf is long-distance.)
School:
Even though I didn’t end up with any cancelled classes due to snow, my Psych class was cancelled on Wednesday. I also have two cancelled classes in the upcoming week. Yesss.
I found out my other test scores from last week. Good and bad news.
In Ecology I got over 100. (Even though I missed 9, I got 11 points extra credit. He made commonly missed ones extra credit, which happens to be ones that I knew.)
In Genetics I got an 83… I know that doesn’t sound too bad, but it’s one of my worst test scores ever. It’s frustrating because I do understand the material, but I was rushed to get the extremely long test finished in 50 minutes.
God:
On Thursday night, I went to a worship service on campus held by the Christian Campus Fellowship (CCF). I told my therapist I would go in November.. and I know it’s February, but hey– better late than never! A friend from high school went with me and it was really good! They are doing a series on The Sermon on the Mount and that night it was about Matthew 5:27-30 (Adultery/Lust/Sex). We plan to go back on Thursday nights.
If you recall, I am reading the Bible in one year. I got behind in the past week (because again, I am so tired all the time), but I intend on getting caught up.
Whoa (sad):
I actually fixed my hair and put on make-up yesterday… I had to send my bf a picture!

Does anyone have any ideas for this exhaustion and also disruptive sleep? I wonder if it is related to the a word or maybe depression and perhaps my medicine will help…

Picture from the beginning of my 20’s. My last birthday with my Dad here. :(
Happy Half-Birthday to Me and Happy Groundhog Day to You! I’m not sure why I never let my half-birthday go unrecognized, but I feel it’s important too. When I have kids, I think I’ll do something special for their half-birthdays each year.
Do you let your half-birthday pass by without thinking about it? When is yours?
Maybe it’s an August 2nd thing because twins from my HS class who share the same birthday “celebrate” theirs too. They already texted me today wishing me a Happy Half-Birthday! (Aw and so did my bff Nour. She knows me well.) 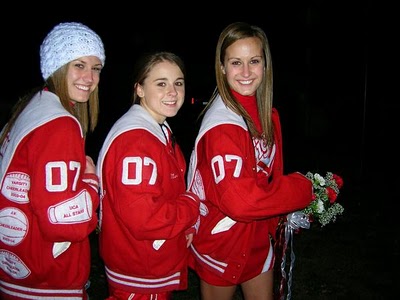 The twins and me on Senior Night, Fall 2006
I don’t actually eat cake or anything for mine… it’s only half as special anyway, right? I just take a second and realize how quickly 6 months goes by!
I’d rather look at it as half-past my 21st birthday instead of half-way to my 22nd. No need to rush any further into my 20’s… I’ll be 30 soon enough! And I also never liked to rush my birthday because it’s near the end of summer. ‘Cause you know what comes after that…
Speaking of seasons and back to Groundhog Day, I refuse to believe Punxsutawney Phil. Spring IS coming sooner than later.
Ryan met that silly groundhog before…. 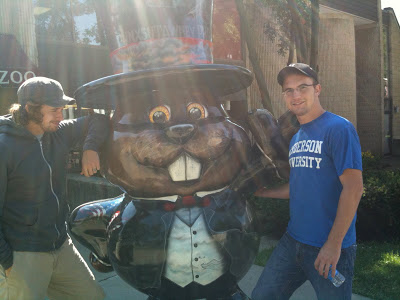 Reflection of my high school aiding (observation) experience thus far (about 12 hours out of 60 hours completed)….

One year ago I was dragging my feet about packing and moving back to AU for my second year. We thought my Dad was cancer free because his CT scan in June came back clear. But we were ever so wrong. I knew deep down in my being that something just wasn’t right. He had facial paralysis and some facial pain, but a radiologist assumed he had Bell’s Palsy.

My life was about to turn upside down and I wasn’t ready.
I reluctantly said goodbye to my family and moved into AU. I immediately knew something was going on with my boyfriend. You just can’t help but notice those subtle signs after a few years together. I tried to ignore it at first, but that didn’t last long. I was only at AU for 4 days, but looking back it seems like much longer. I spent a lot of the time crying, fighting, and confused. What was I doing there? I thought. I felt so out of place.
I made the decision to withdraw from AU after two days of classes. I left AU with a heavy heart, but knowing I was doing the right thing. It was hard, and I didn’t understand the why’s of anything.
That same week came the heart wrenching break-up. It was ever so frustrating and painful, especially when I cut contact with Ryan soon afterwards. When I thought things couldn’t get worse, on September 11th my Dad had his check-up PET scan. We found out it wasn’t Bell’s Palsy, but a tumor in his parotid gland. I knew why God had sent me home, but it wasn’t for any good reasons. My heart hurt so bad that all I could do was turn to God for help. He began to guide me through the tough times, while drawing me closer to Him. Yet I still longed to be with Ryan and sometimes I just had to bare the pain.
Since I wasn’t going to classes, I began to substitute teach at St. James schools. I became friends with an old HS classmate, Tiffany, and I’ll never forget what she said… I feel like we’re meant to be friends for a reason. I also became friends with another HS classmate and old friend, Caylee, who had a baby girl.
Today, I find myself in a position where just a few years ago I would’ve said… Not me, not my family. That can’t happen to us.
I live in the home that my Dad built, without him, because he now lives in his real Home in Heaven. My heart is bruised and I’m just beginning the healing process from the past two years. I go to school at S&T, a local university, as a biology and education major. Just a few years ago, I would’ve laughed in someone’s face if they would’ve said, You’ll be a student there someday.
I remember clearly a year ago, I didn’t think I would ever call Ryan my boyfriend again. Two years ago, I wouldn’t have wanted to imagine living 384 miles away from him. I would’ve been thinking engagement would be up next, not a break-up.
Besides Ryan, I have a few friends; most are long-distance though. I’m still friends with Tiffany, and now we unfortunately relate in a heart-aching way. We have both lost our fathers from cancer. Most of the time I struggle with loneliness. I think it’s a result of many things, and will heal over time. I am certainly not in the ideal situation, but I remind myself it won’t be this way forever. I’m so ready to be content again, I haven’t felt that way in 3 years.
I’ve learned to accept the fact that I have no idea what’s in store for me. It’s scary and exciting at the same time, but I’m comforted to know that God knows every detail of what’s to come.
What will I be writing a year from now? Where will I be living? What school will I be attending? How will I be feeling? Will I have any new friends?
Wherever I find myself, I hope I find myself happy.