Digging up the past

Sometimes there’s no reason to dig up the past, especially if it’s painful. In this case, however, I feel the need to at least reflect upon it and the lessons learned. Although breaking up brought much heartache and tears, it also brought us closer. It gave us the opportunity to take a step back and examine our relationship. Unfortunately, sometimes you have to learn the hard way. Ryan and I have come a long way since then and if you could see our relationship now, you wouldn’t know we were broken up just a year ago.

Last year at this time, Ryan and I had not communicated for pretty much 2 months. We broke up in early September (2008) for reasons I still don’t completely understand. It’s just one of those things where the stressors of life (there were many) take a toll on your relationship if you can’t take care of it. Although it was extremely painful, I think we both knew we had no other option at the time. So much happened at once for me… I withdrew from AU for the semester, moved back home, Ryan and I broke up, and my Dad found out he had another tumor. I can’t explain the pain in words, but I immediately turned to God and He drew near to me. Without Him, I would’ve been miserable.

Soon after we broke up, I cut all contact between us because it was less painful that way. Let me tell you, in the world of Facebook, Twitter, and all other bittersweet internet outlets, it’s not easy to break-up these days.
I didn’t have this blog then, however I did start to write my feelings out on an old Xanga account I had. It was good therapy to write, and eventually Ryan was able to read how I had been feeling for two months. To be exact, he read it on this day of last year.
I had been thinking, praying, talking, and dreaming about him regularly, but hadn’t talked to him. Saying it was a challenge is an understatement. Everyday, I prayed and begged God to let us be together again. Some days were harder than others… but I never stopped missing him. Everyday was a constant battle with myself to keep from talking to him.
Something I wrote on Oct 12th, 2008…
—————-

I miss you like crazy. I wish you were here so I could tell you about my day. I wish you could hold me. I wish I could hear your voice and see your face. There are so many things I wish, but they can’t be right now. Will they ever be? I don’t know right now… All I can do is pray and trust God.

Eventually I got to a point where I just couldn’t take it anymore. I had to let him know I was thinking about him, so he didn’t think I gave up on him. Since I didn’t want to directly communicate, I decided to use Twitter, something that I never used at the time but I knew he would see. After not getting a response back for a couple days, I began to wonder if he really did see it… or worse, if he didn’t care to see it.
On November 9th, I was in bed for the night and received a text. I remember wondering who it could be… and when I looked I couldn’t believe it. He made the effort to text me. He cares.
I felt a million emotions at once. We sent a few texts back and forth and I surprised myself by telling him about my Xanga. I felt very anxious about him reading it that night.
Here’s my blog post from the next day, November 10th, 2008.
—————–

Nothing like living on hope instead of sleep, right? =) I like it. Good thing we had the lights off while I was subbing (I watched “Corpse Bride” 4x) or else they would’ve thought I was on drugs with my bloodshot [tired] eyes. I’m not complaining- I promise!

Is the hope real? I’m going off of about 10 words and a few assumptions.

I need to take a nap so that I can be awake for yoga tonight. I’m sad ’cause I’ll have to watch Jon and Kate at 11 instead of 8 because of yoga…and tonight is the special wedding episode!
[It’s not the same without you…We have some oreos…]

You know what’s funny? Actually it’s not ‘haha funny’, but weird funny. The fact that gas has been going down and is now $1.89 makes me sad. Know why? Call me crazy, I know.
…And it could be anywhere, as long as it’s with you.

I better stop writing because I’m a little tired and a lot excited. I need to calm down and be careful.

P.S.- As I was trying to go to sleep last night, I could feel my heart beating throughout my whole body. I didn’t count, but it was probably 200 bpm (is that the right word?).

——————
I left the rest up to him and the next day he indicated that he wanted to talk. It took a while to catch up on each others lives… and we made plans to talk in person when he came home for Thanksgiving break two weeks from then. Here’s what I wrote about that day:

The beginning of my prayers, hopes, and wishes came true on 11.11.

My heart could explode with joy and excitement. <3 I can barely put it in words…
‘Each heart knows its own bitterness, and no one else can share its joy.’ Proverbs 14:10

P.S.- The change my mom received at Hallmark today was 2.14. I smiled.

—————
When he came home for Thanksgiving, I had never been so nervous and anxious to see him in my life. I got all splotchy on my chest and highly considered taking a Valium (although I decided against it). He couldn’t deny his feelings either… his special smile gave it away the entire night. My heart melted all over again.
And that was the start of our new beginning. 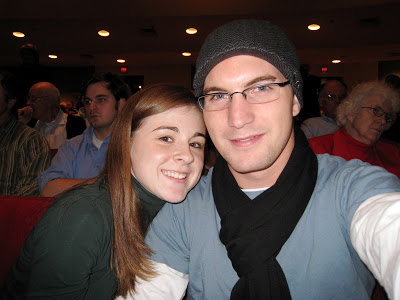 Dec 2008
I am so thankful for our relationship and to be able to call him mine.
{Love you Ryan!!!}