Welcome to Not Me! Monday! This blog carnival was created by MckMama. You can head over to her blog to read what she and everyone else have not been doing this week. (But if you don’t want to go for that, you should go to her blog to witness a miracle of God. Amazing.) 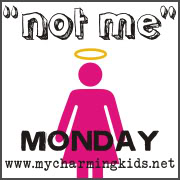 ———
Is it possible that I could’ve won yet another giveaway? Certainly not me again! Must be a different Mindy. ;-)
I did not change my mind and decide to speed most of my trip back and forth to Anderson this weekend! I strictly abide by the 65 mph Illinois speed limit law just like everyone else.
On my way to AU, I did not wait so long to stop for a pee break that I had to take my belt off at a stoplight to relieve some pressure and had to painfully waddle to the bathroom to make it… not me!
What? Who didn’t exactly follow the “open house” rules at AU* this weekend? It wasn’t me!
*Anderson University has certain open house hours and rules for campus housing in regards to the opposite sex. In the apartments, like where Ryan lives, one is only allowed in apartments’ of the opposite sex from 10 am-2 am on weekends and 10 am-midnight on weeknights. Also, you aren’t supposed to go in the bedrooms– the rules are to stay in the kitchen/living room area only. In the dorms, it’s even stricter. Way less hours, must have the door open 45 degrees… and when time is up, you hear the RA’s run around the halls reminding you like little kids.
I did not write lackluster posts this weekend just to barely hold true to my commitment to NaBloPoMo. Not me! Instead, I set aside time to think, reflect, and write meaningful words instead of hanging out with my boyfriend. (ha)
It wasn’t me who snobbishly refused to eat food at AU facilities and instead used the money my Mom gave me to buy it elsewhere!
I did not stay up on my computer too long and thus turned off my alarm on Sunday morning and almost miss church, but made it by not washing my hair… it did not look like a greasy mess at the end of the day!
I did not stare at Ryan’s cute face all weekend long like a crazy girlfriend who doesn’t see her boyfriend enough. Okay, yes I did and call me weird all you want. I don’t mind.
Ryan did not have to remind me about his yet-to-be birthday present from several months ago. Not me!
I did not get directionally confused in Ryan’s apartment complex again. Nope, I figured it out last time.
I did not complain about going to class tonight, even though I did get to stay an extra day because of my easy class schedule, only go to class 4 x a week… and ended up getting out early tonight. Nope, not me!
Oh and can I do a Not My Boyfriend! section for a second?
My boyfriend did not buy a new iMac + Magic Mouse and hide that fact from his girlfriend (ahem, me) for several days… Guilty conscience?
It did not take Ryan 5 minutes to realize he had warmed up the wrong leftover pizza from his fridge, even though wrong leftovers looked totally disgusting and had one more piece than we remembered… We even said something about the odd looks of it. (Okay, and maybe I was involved in this mistake too.) It finally clicked that the pizza we warmed up was actually Ryan’s roommates’ from the gross food service on campus, hence why I refused to eat there. (It was funny, but you had to be there.) I mean, if we did that. But not us!
———
I hope your Monday was as good as Mondays can be. Do you have any not me moments to share with me? I’ll try to do this NaBloPoMo thing better the rest of the month. No promises, though.