Skip to content
Happy Heart Day! <3
2.14 is not only Valentine’s Day, but also the date when Ryan and I became an official couple in 2006. It is a very special day for us.
Personally I love our love story…
Let me first tell you that I had my eyes on Ryan since junior high. I didn’t really know him, but I knew he was HOTT. In high school he was in Drumline and I was in Color Guard and I specifically remember checking him out at band rehearsals quite often. This part sounds bad, but all my ex-boyfriends even knew about this attraction I had. I never acted on it– just enjoyed the eye candy.

Well, after a very dramatic break-up at the beginning of my junior year, I was just about fed up with boys. I had a few guy friends I would hang out with, but I was pretty much convinced I would not find anyone in St. James that was “dateable.” I mean– come on, it’s a small town. I THOUGHT I knew every guy and none of them were an option. Truthfully I thought I’d find a guy at college because St. James was hopeless.

Fall of 2005 (my junior year) I had embraced the single life for one of the first times. I was always the girl who had a boyfriend. By “embracing” it, I mean hanging out with close girl friends, like Miss Courtney Campbell. One night I remember so clearly (to be exact, November 5th) Courtney and I are talking on MSN and she says.. “We should find some guys to hang out with tonight!” Immediately my reaction was, “Ha..like who?!” And then basically out of nowhere I said, “The only guy I would consider is Ryan Ray.”
Well, let me back up a minute. Ryan had not been on my mind or “eyes” for a while just because I was so involved in a relationship and then break up. And then about a month before we first hung out, I started attending the First Church of God youth group on Wednesday nights [I went with Jess Hays who was going with Kelly Cornick]. This was the point where my life was really turning around and I truly became a follower of Christ. This is also a really cool part of our love story because if I would’ve met Ryan before this point, he would’ve known me as a totally different person and wouldn’t have necessarily liked who I was. God has perfect timing. Anyway, to my surprise, guess who was the drummer for youth group? Ryan Ray. From that point on, I think he was in the back of my mind.
So after telling Courtney about the only guy I would consider, she adds him on MSN Messenger. She doesn’t really know him, just knows of him — same with me. But regardless, she talks to him on MSN and she finds out he is meeting some friends at Imo’s that night. AND SHE INVITES OURSELVES TO JOIN THEM. This is borderline stalkerish, but I guess he did agree. And plus, one of my good friends, Jess, was going too. Once again, small town– we knew the other two girls who were going, Kelly & Sarah.

You can imagine…I was flipping out because Courtney and I were going to hang out with Ryan Ray, the cutest guy I knew (seriously), who probably thought we are CRAZY! First, Courtney and I went to a candle party at Drenda’s house and then we were on our way to Rolla. Our car ride was a little crazy because we ended up taking our shirts off and sticking them out the window to “dry.” HAHA- I’ll leave it at that.

When we arrived (with wind blown hair) they had already ate so we just hung out for a little bit. I think it was kinda awkward, but not too bad. I did, however, invite Ryan to Laura’s house because that’s where Court and I were going next. We drove back to St. James in a bad storm, and finally arrived at Laura’s house. There were some other people there hanging out, and I don’t remember how Ryan got there- but he did show up. I couldn’t have been more excited! I think we were just hanging out, watching movies, and as it got later, Courtney had to go home and I had to take Heather home. Well Ryan and another guy rode with me in the car to take her home and I remember clearly I said to Ryan, “You know I’m not gonna take you home, right?”

So we went back to Laura’s house and the people who ended up staying were Ryan Ray, Ryan Dautenhaun, Caylee, Jim, Moniek, and myself. Oh I forgot to mention that Laura was out of town and we were actually having this get together without her, haha!

The rest of the night proved to be interesting… We ended up going to Denny’s around 3 AM, all packing into my LITTLE CAR! I let Ryan drive because I was too terrified that I would get in trouble (I was 17 and the law is you aren’t allowed out between 1-5 AM.) Plus I had 4 people in the backseat, when it only allows 2. Our first destination was one of the people’s work to coughillegallycough borrow the work van at 3 AM. So half of us split up into either car. WERE WE CRAZY OR WHAT!? We went to Denny’s and of course, there were cops there and I was realllly scared that I would get in trouble for being out. They didn’t anything thankfully, and the work car was returned safely, and back to Laura’s house we went! We all decided we would try to sleep even though it was probably 5 AM at this point. There were four of us in a bed, and two on the floor. At like 7 AM Ryan had to go home so I took him (surprised?) and he didn’t even have to give me directions. NO I did not stalk him, my friends used to live close to him.
Ryan at Imo’s being silly: 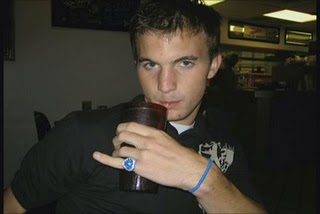 Everyone crowded in my backseat: 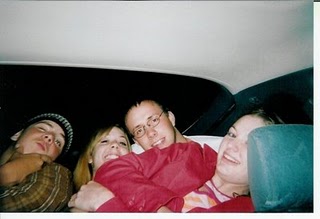 5 AM: Yes, that’s me next to Ryan, haha. Nothing like a spooning party with someone you just met! ;) 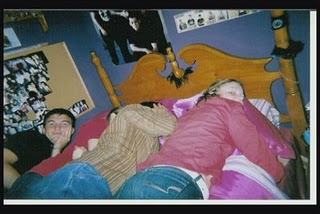 Anyway… the rest of our story? We hung out almost every single weekend after that (besides when we were out of town for various reasons). We even hung out a few days after this with another group of people and watched the stars. Sigh. Let’s just say I fell hard..quickly. His personality was just as amazing as his looks. How did Ryan feel? Well, he was playing a little game of hard-to-get. ;) Ok, obviously not playing it too well since he hung out with me a lot, but I couldn’t tell if he was interested for a while. I remember the first time he actually asked me on a “date” to go eat Chinese..Surprisingly I don’t remember the exact date, but I know it was sometime in December. From that point on, it was obvious we both liked each other. Our first kiss was the beginning of January. And like I said, we became an official couple on 2.14.06. He gave me a V-Day card that said to look in a certain place at my house, where he had flowers and a letter about wanting to be in a relationship. It was soo adorable.
Let me tell you what’s awesome about 2.14.
2 was the day I was born, and 14 was the day Ryan was born. I think that’s the coolest thing!! Also, I came up with this “acronym”: Two (2) as one (1) for(4)ever.
And see the top of my blog: He is R squared I am M squared and 2.14 <3>
[Yes I do need to get a life.]
No pictures from V-Day 2006 :'( 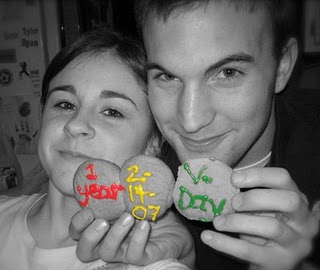 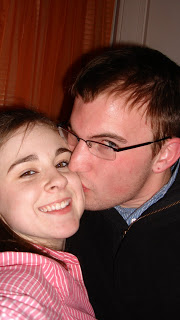 This year we are 400+ miles apart unfortunately. :( I miss him dearly.
I could go on and on about Ryan and me, but I’ll leave it at this for now. I absolutely adore him and I am still amazed how everything has worked out… God’s “fingerprints” are all over it!
Hope you have a great February 14th! I’ll be thinking about my Valentine allll day.
Side note:
After reading this, it may sound like our love story is “flawless.” Well let me tell you that even though it was like a fairytale come true, life isn’t perfect. We’ve had our fair share of rough times, and yes we did break up in Sept 08. However, it was for the best and God answered my prayers– we started talking again in November. I don’t want to ruin the mood of this blog since it IS 2.14, so enough of that. Just thought I’d clarify that even though our love story is amazing, it’s also real life.