Skip to content
I’m still alive, incase anyone out there was starting to wonder about me and why I haven’t blogged since last year! I’ve been at my Grandma’s this week and away from my computer… and also hanging out with Ryan of course. I’m sure you’ll hear all about it soon. :)
Happy 2010! It’s not really necessary for me to recap 2009. I think I’ll save myself the depression and just leave it at…. it sucked.
Here’s to hoping 2010 likes me better than the past few years. Honestly, I don’t have high hopes, but I’m open for it. It’s a new decade, so that’s a good start maybe. 10 years ago I was 11 years old and babysitting on New Year’s Eve. (For my bff’s sister, who lived a few houses down from Ryan!) I was afraid the world might end before we saw the year 2000. Looks like we’ve made it to 2010.
New Year’s Eve last night I almost fell asleep before midnight! I’m getting old I guess. Ryan and I went to Sybill’s and then just relaxed at my house. (My Mom tried to kick me out for the night but she had to go elsewhere because I told her I wasn’t going anywhere.) We’re kind of boring– no partying here. 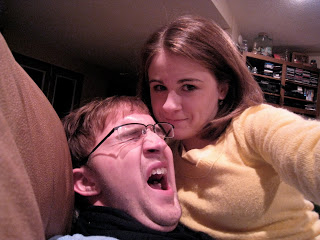 See?
Although I did try to trick him into drinking wine by calling it grape juice.. buuut I failed miserably.
In more exciting news…
I ended 2009 with a big win! When I got home from my Grandma’s, I received a nice email that led to much excitement.
Remember when I wrote the post about the BlogHer giveaways…
and I told you that I would tell you if I won…
and I was really hoping I would win something? (duh)
Well…. I’m here to announce…

THIS IS THE BIGGEST GIVEAWAY I’VE WON!

LOOK! It’s a Viliv S5!!!
What is heck is that, you ask? It’s a pocket PC worth $500!
Will my blog giveaway luck carry over to 2010? I keep thinking it has to end. You’ll have a chance to win something here soon, FYI!
—-
Regarding my last post about moving out, I’m thinking I should stay here at least one more semester. Otherwise, I may not finish school ’til I’m old and gray and I’ll be a ton of debt. Probably the dumbest decision I’ll ever make. I probably won’t spend 3 weeks straight with Ryan again ’til next Christmas. Someone tell me I’m dumb.
—-

A picture by Ryan